Adetoun and Ada Ameh had threatened to beat Kemi Olunloyo for alleging that Sylvester Oromoni was willing to join the cult, consenting to being beaten, and agreed to drink motor oil.

Tacha suggested anyone going to beat up Kemi Olunloyo should videotape the action in a tweet on the microblogging network Twitter.

Kemi Olunloyo was enraged by Tacha’s statement, characterizing her as a PH lady with a bleaching cream body odour who beat up the queen of highlights on the BBNaija reality show.

According to Kemi Olunloyo, violence is not a solution to disagreements, adding that Tacha was disqualified from the show for assaulting the royal highness. 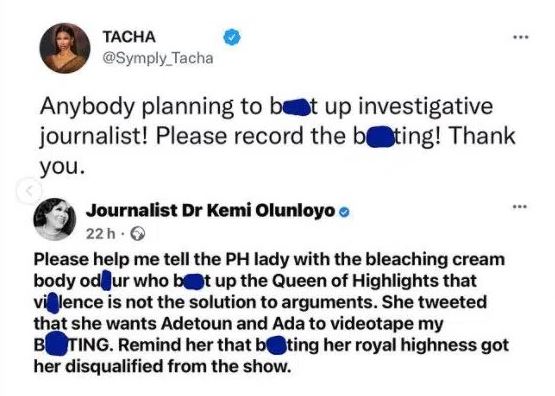