Aprokorepublic recalls the 60-year-old politician had opted for the fastest alternative means of transportation after facing heavy traffic in Ikeja yesterday to make it to the airport on time alongside his personal security officer.

In reaction to the photo making rounds on social media, Cubana Chiefpriest reveals that the picture will serve as a lesson to all serving governors of all states behaving rashly towards their citizens.

According to the socialite, the former governor would have been on a private jet travelling round the country if his tenure as a governor hadn’t ended.

Speaking further, he said anyone holding a high political post should treat his citizens well as we are all the same and nothing lasts forever in life.

This Pic Na Lesson To All These Governors Doing Their Fellow Citizens Anyhow, Once You Tenure Finish E Go Clear For Your Eyes, If He Was Still To Be Governor Na PJ✈️ But Now Baba Dey Jump Okada🚴 To Catch Airpeace✈️ Treat Your Citizens Well We All Are The Same, Nothing Last Forever, This Sapa Wey We Dey Suffer Now Go Reach Everybody 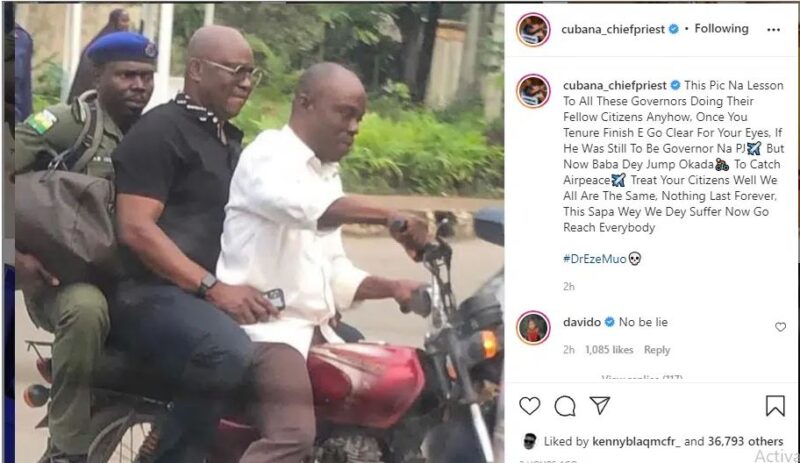 READ ALSO:  'We are ready to welcome the world'- Anambra govt. as international airport opens (Photos)
Related Topics:AirportObi cubana
Up Next

You Can’t Make Changes Without Joining Politics – Osinbajo To Youths