OBO via his Instagram account hinted that he has something special for his fans. Apparently, Davido is ready to release a new single, and this time it is not a collaboration or a feature.

Davido informed his fans that what he is cooking is something extraordinary, what they haven’t heard before. He referred to it as a “Champion Sound” and his fans have better hold on tight so they won’t be blown away.

He also didn’t reveal the name of his upcoming project or the official date of its release. Considering Davido and how he never disappoints, we are certain he will be dropping it before the end of the month. 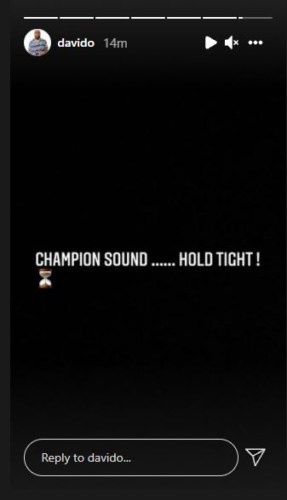 Dowen college: Two Of The Students Suspected In Harming Sylvester Are Currently On The Run – CP Odumosu

UCL: Chelsea Get Major Boast Ahead Of Zenit Match