Controversial political activist Reno Omokri has come out to drop a few words of warning for all the guys out there.

Taking to social media the outspoken activist stated that guys should know that they dating a successful urgent 2k girl when she has a nice place, a car, an iPhone, and wears designer clothes but doesn’t come from a rich home, or have a well-paying job, or has won a verifiable lottery.

On his page he wrote👇🏻

dear men, Don’t miss out on red flags when dating. She has a nice place, a car, an iPhone, and wears designer clothes. But if she also does not have a high paying job, or a profit-making business, or a rich family, or has won a verifiable lottery, then you are dating a successful urgent 2k girl!

Even if she is as religious as a nun, or as seemingly innocent as a child, there is no exception to this rule. Marry such a one at your peril, but don’t come crying to us when DNA destabilises you in the future! 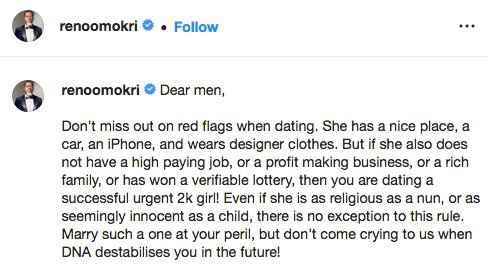 READ ALSO:  Reno Omokri Gives Reason Why He Does Not Have Sympathy For Single Mothers
Related Topics:Reno Omokri
Up Next