Governor Dapo Abiodun of Ogun state has reacted to former Governor of Lagos state, Bola Tinubu’s jab while bragging about making him Governor.

“That one (referring to Abiodun) that is sitting down here, could he have become governor without me? We were all in the stadium where they tore all the posters. Even the candidacy of the party, they didn’t want to give it to him.

“It’s been over 25 years that I have been serving them. This one sitting at my back, Dapo, could he have become a governor if not for me.”

However in a tweet shared today, Abiodun stated that he is not an emperor and the Governorship position is not his family’s inheritance. He added that he is holding the position in trust for all the people of Ogun state.

I am not an emperor by any chance and this is not my family inheritance. I am holding this position in trust for all the people of this state and I have vowed to be fair, just and equitable and this is the solemn agreement I made between the Almighty God and myself. 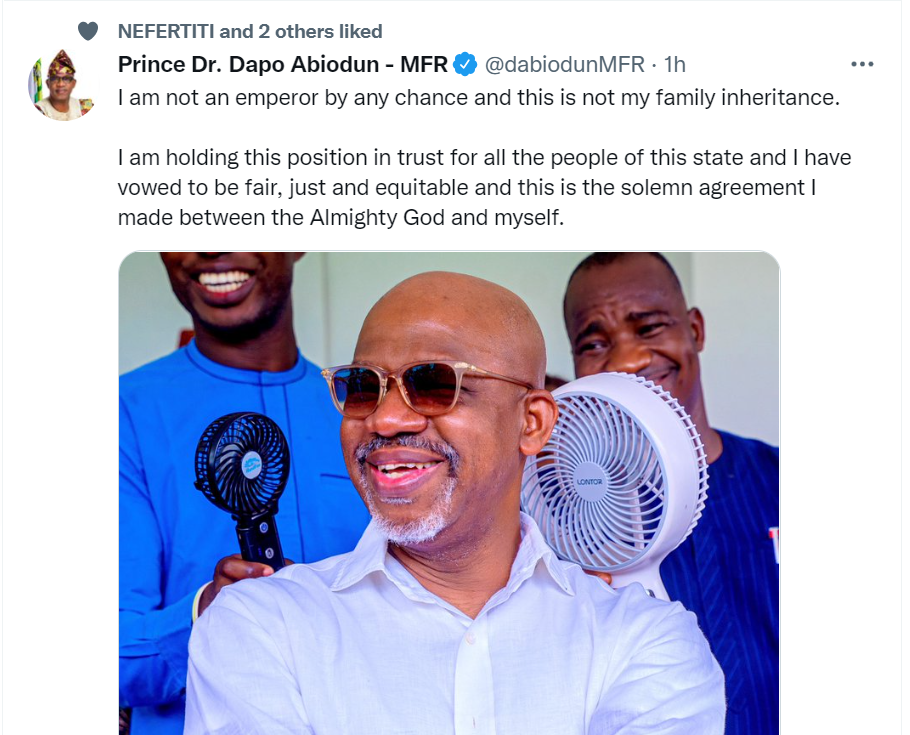 READ ALSO:  "He Did Not Kidnap My Baby" Mother Exonerates Dispatch Rider Of Any Wrong Doing (Read Full)
Related Topics:Governor Dapo Abiodun
Up Next

2023: I Have Not Dropped My Presidential Bid For Osinbajo – Governor Fayemi

Monkeypox Can Be Transmitted Through S*x – NCDC Warns