THE Posters of former President Goodluck Jonathan have flooded the national secretariat of the ruling All Progressives Congress (APC) in Abuja.

The posters with a big picture of the former President in his South-South attire and a bowler-hat with the inscription”Goodluck Jonathan You Must Run” are occupying a conspicuous position on the wall of the party secretariat.

Our correspondent also noticed the posters on the fence of many buildings, especially the uncompleted ones along Blantyre Street where the APC secretariat is located.

Though nobody was able to ascertain those that posted the posters, our correspondent gathered that some young boys were seen doing so.

The Gov. Mai Mala Buni-led Caretaker/Extraordinary Concention Planning Committee (CECPC) with some APC Governors paid a courtesy visit to the former President, fuelling suspicion of moves to woo Jonathan to the party.

The caretaker committee was alleged to have muted the idea of dragging the former President to contest the 2023 presidential election on the platform of the party.

But the defunct CECPC refuted the allegation with Buni explaining CECPC only visited Jonathan as an elder statesman. 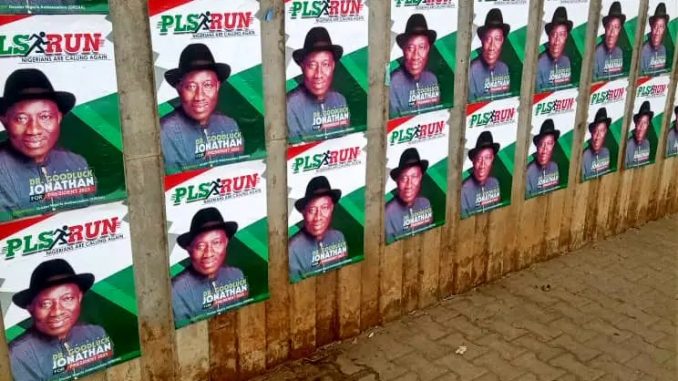