The Lagos State Judicial Panel of Inquiry on Restitution for Victims of SARS Related Abuses and Other Matters (Lagos EndSARS Panel) has concluded that the Lekki Tollgate shootings of October 20, 2020 was a massacre.

This was contained in its 309-page report submitted to Governor Babajide Sanwo-Olu on Monday.

It indicted soldiers and implicated Nigeria’s security agents in the killing and forced disappearances of harmless and unarmed youths protesting at Lekki Tollgate on October 20, 2020.

According to the report, at least 48 protesters were either shot dead.

“The atrocious maiming and killing of unarmed, helpless and unresisting protesters, while sitting on the floor and waving their Nigerian flags, while singing the National Anthem can be equated to a ‘massacre’ in context.”

“It was alleged and corroborated that the soldiers had their vans parked at the Lekki Toll Gate and removed as many bodies and corpses of the fallen protesters which they took away with their vans.”

According to the report, “the Nigerian Army was invited for intervention in the State and was deployed to Lekki Toll Gate on the 20th of October 2020.

At the Lekki Toll Gate, officers of the Nigerian Army shot, injured and killed unarmed helpless and defenseless protesters, without provocation or justification, while they were waving the Nigerian Flag and singing the National Anthem and the manner of assault and killing could, in context, be described as a massacre.

“The Panel also found that the conduct of the Nigerian Army was exacerbated by its refusal to allow ambulances render medical assistance to victims who required such assistance.

“The Army was also found not to have adhered to its own Rules of Engagement.

“The Panel found that the Nigerian Police Force deployed its officers to the Lekki Toll Gate on the night of the 20th October, 2020 and between that night and the morning of the 21st of October, 2020, its officer shot at, assaulted and battered unarmed protesters, which led to injuries and deaths.

“The police officers also tried to cover up their actions by picking up bullets.

“The panel found that LCC hampered the panel’s investigation by refusing to turn over some useful and vital information/evidence as requested by the Panel and the Forensic Expert engaged by the panel, even where such information and evidence was by the company’s admission, available.

“It manipulated the incomplete CCTV Video footage of the Lekki Toll Gate on the night of the 20th of October 2020, which it tendered before the Panel.

“The Panel found that there was an attempt to cover up the Incident of the 20th of October by the cleaning of the Lekki Toll Gate and the failure to preserve the scene ahead of potential investigations.

“Sanctioning of the officers of the Nigerian Army and the Nigerian Police Force respectively who participated in shooting, injuring and killing of unarmed protestors at the Lekki Toll Gate on the 20 and 21st of October 2020;
“Development of more robust engagement between the Youth and the Government;

“Setting up of a Standing Committee/Tribunal to deal with cases of Violation of Human Rights by security agencies and a trust fund to settle compensation awarded by such committee/tribunal;

“A public apology to ENDSARS protesters who were killed, injured and traumatized by the Incident of the 20th of October 2020;

“The memorialization of the Lekki Toll Gate and the 20th of October going forward.

“The recognition of Hospitals and Medical Doctors who played heroic roles following the Incident of the Lekki Toll Gate on the 20th of October 2020 thereby saving lives and minimizing the impact of the injuries suffered by the victims, most of which were on a pro-bono basis;

“The Panel recommended various sums of compensation to victims of the Lekki Toll Gate Incident, which must be expeditious in order to accelerate the healing process.

“The Panel recommended that any data that may have been generated over the years on the impunity of the Police across Nigeria be studied and deployed as early warning signs (EWS) mechanism.”

See Names Of Victims Below: 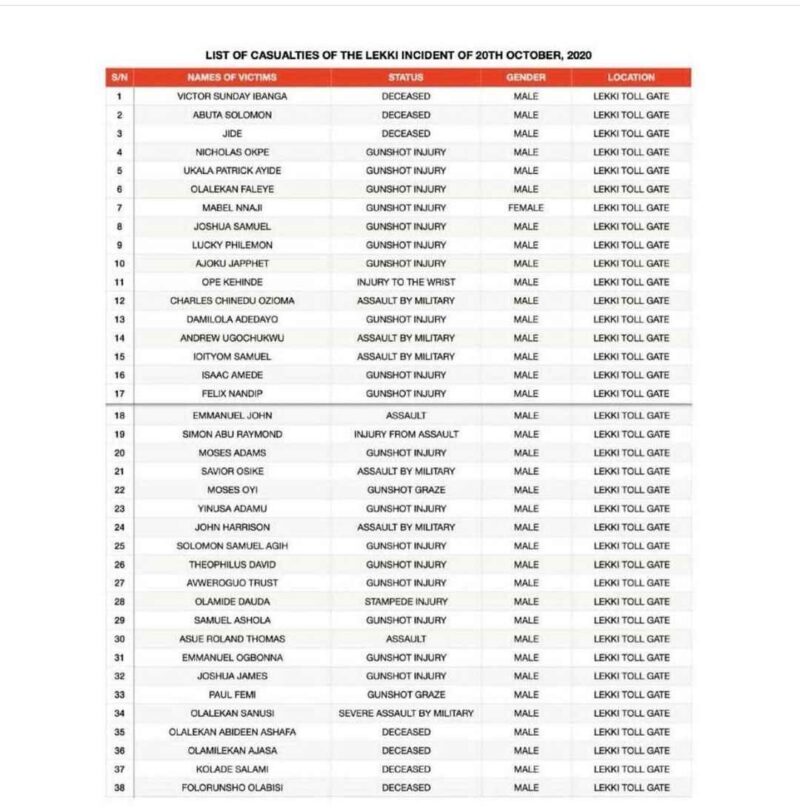 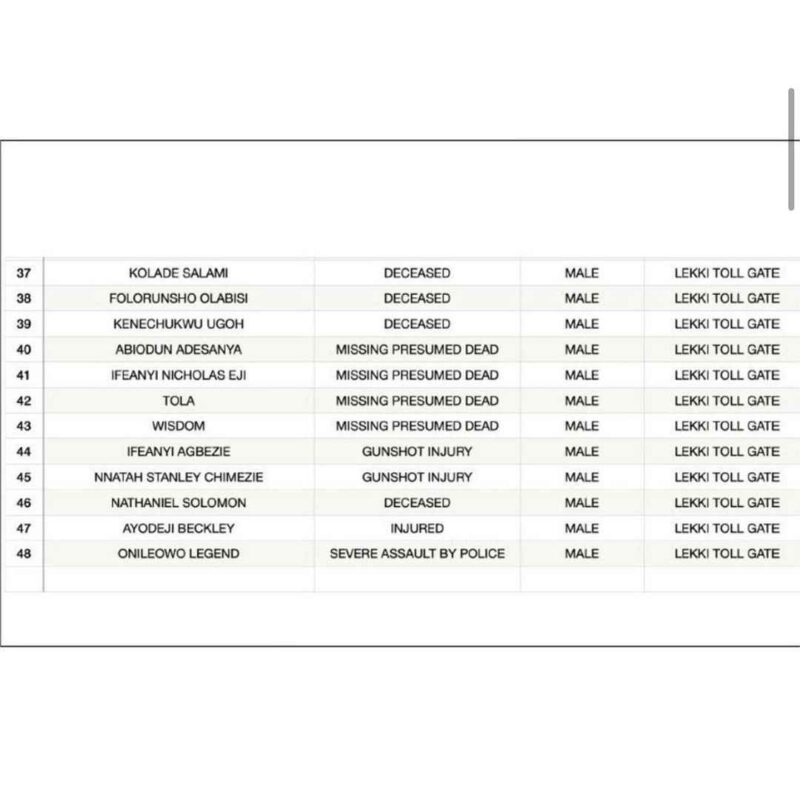 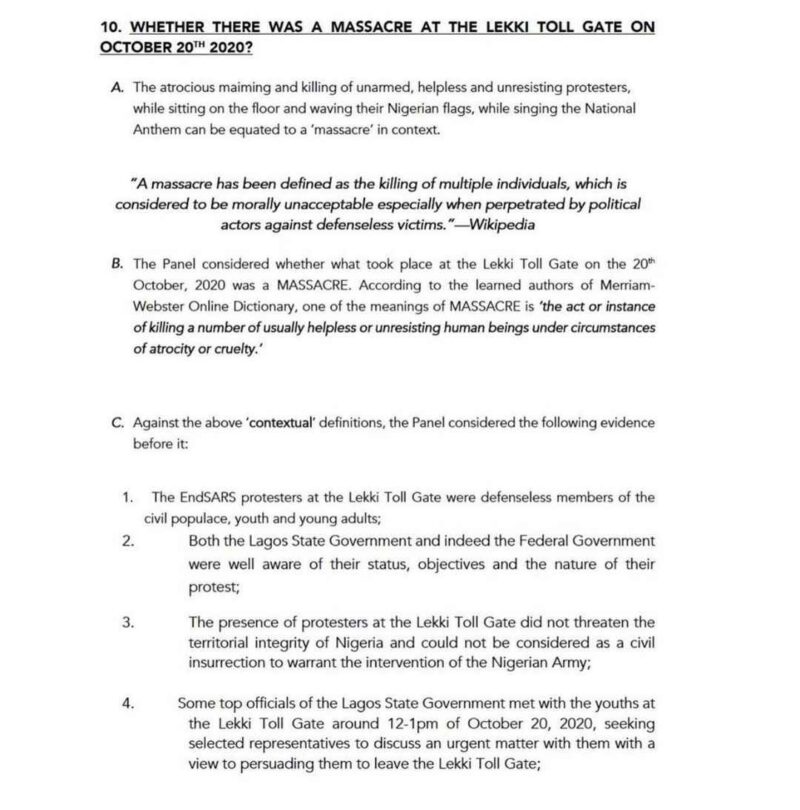 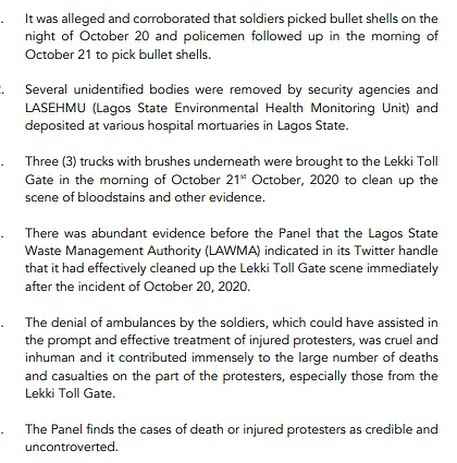