Former Presidential aide and activist, Reno Omokri took to social media to advise parents about the words they say to their wards.

He stated that parents should encourage their children instead of comparing them to their mates.

He advised parents to believe in their children and stop mounting pressure on them.

“Dear Parents, Except you are richer than Elon Musk, and smarter than Albert Einstein, never, ever, tell your children, ‘see your mate’. You too have mates that you don’t measure up to. So stop measuring your children to their mates,” he said.

“Measure them to their potential. Do you know how Elon Musk, Jeff Bezos and Bill Gates became super successful? It is because they had parents who believed in them, not parents who compared them with their mates. Believe in your children. Encourage them. Stop pressuring them with ‘see your mate’!” 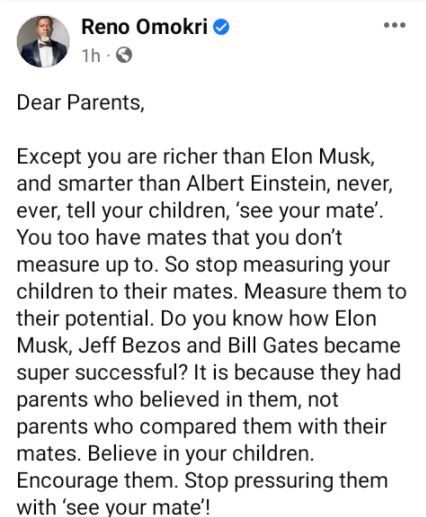 READ ALSO:  Woman Who Had 10 Kids With 10 Different Men Buried in Pen!s-Like Casket (Photo)
Related Topics:Reno Omokri
Up Next

Nigerians Lament As Diesel Sells For N625 Per Litre