Nigerian singer, Teni has been involved in a clash with producer, Shizzi who accused her and her label of cheating him by reproducing her song, Case without his consent.

According to Shizzi, Teni and her label gave their in-house producer the song, Case even though he was the one that produced it from scratch. This all happened on Saturday, the 18th of December 2021.

Recall, Teni released Case in 2018 and that became a really big song in the country at the time and became the singer’s grand entry into the music industry. The song was released under her label, Dr Dolor Entertainment.

The Primary Individuals involved in this Story are: Shizzi, Teni and JaySynths.

Some people might be wondering who JaySynths is, we’re coming to that soon.

Secondary Individuals, (Individuals who could have been left out of the conversation): Samklef (A.K.A: Tunde Ednut’s Career Mirror), Shizzi’s Wife. But in the case of Violence, everybody must collect.

So let’s get into it…

The clash started when Teni made a tweet about people who “use” others and Shizzi replied her saying she was talking about herself as she double-crossed him on her song, Case. Teni had written; 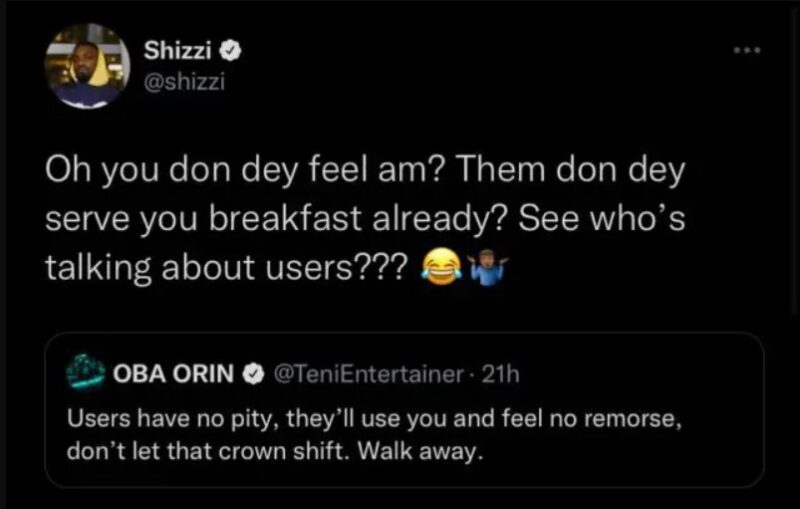 READ ALSO:  BBNaija: Why I Want Pere To Emerge Winner – Saga Reveals
Related Topics:ShizziTeni
Up Next

Morocco 2022: Super Falcons To Resume Camping With 35 Players In Abuja For Lady Elephants