Tonto had mocked the lifestyle influencer for catching a sub that was not his on how celebrities rent money to flaunt online.

Controversial crossdresser, Bobrisky has lashed out at Nollywood actress Tonto Dikeh after she leveled a new accusation against him.

Tonto who is Bobrisky’s former bestie had taken to her social media page to accuse him of living a fake life.

According to Tonto, Bobrisky is in the habit of renting money and flaunting it online as if it is his own.

Reacting, Bobrisky accused Tonto of being a habitual debtor.

Read what he wrote below:- 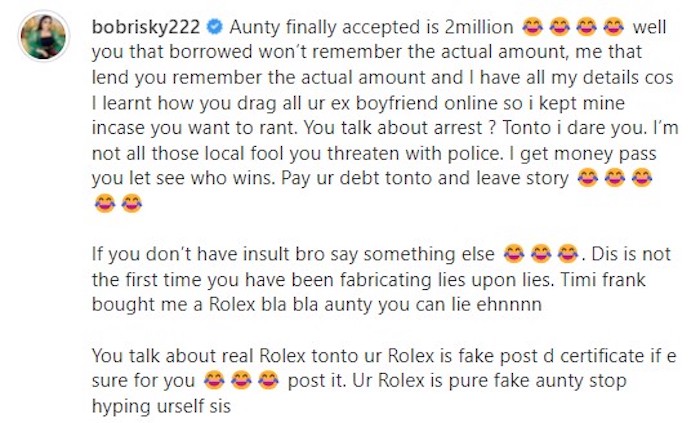 READ ALSO:  Belgian Street To Be Named After Slain S*x Worker
Related Topics:Tonto Dikeh
Up Next

“If You Want To Become Friends With Anyone, Protect Your Personal Info” – Bobrisky Warns