Wizkid has finally responded to Banky W’s statement that he was upset that the singer did not attend his wedding.

Banky W voiced his unhappiness at Wizkid’s inability to attend his wedding due to a performance he had in Dubai in a recent interview with media personality Ebuka.

In the interview, Banky didn’t blame Big Wiz for not being able to come for the wedding but only stated that he wished Wiz was around for the occasion.

“Was I disappointed that he wasn’t at the wedding? I was but I know he tried because there was a show with a lot of the artists…I think it was One Africa,” he said.

“As a matter of fact Tiwa ended up…there was business class and she took economy seat so she could make it. But he called at the time that he was so sorry.”

In the same interview, Banky W mentioned that Wizkid owed his record label roughly three albums, despite the fact that his contract indicated that he was meant to release five albums with EME, of which he only released two.

In his usual manner, the music star left a short message on his Twitter page as a response to Banky W’s interview.

The Starboy Entertainment owner and Frontier CEO just referenced the video with a “LOL,” which stands for “Laugh Out Loud,” in response to the interview on, April 21st, 2022. 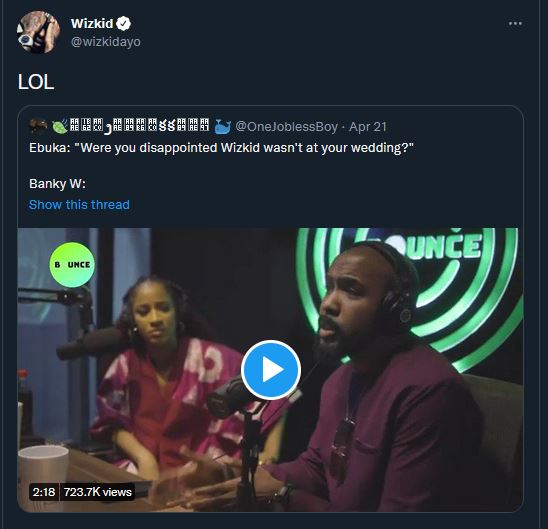 READ ALSO:  See What A Lady Offers Wizkid To Have Tickets To His Show
Related Topics:Banky WWizkid
Up Next